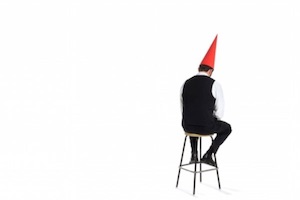 You may not believe it, but there is a word for “google it, you dumb ass” in Japanese: it’s pronounced “gu-gu-re-ka-su (#ggrks).”

The implied message of the word is this:
You’re cutting corners if you ask someone a question you can find an answer to later on and that you may even pass for disrespectful, as by doing so you’re wasting someone’s time.

Up to the age of 12, I lived in the US, where I was brought up in a way to always ask questions,
because “the only stupid questions are those left unasked.”

With such a mindset, coming back to Japan was a nightmare: whenever I asked questions, the response I got was:
“Did you look it up?” or, even better, “You don’t even know that?”

The worst part of it all, though, was that people would not answer, leaving me ashamed of having asked in the first place.

Mind, I’m not saying that having to look up for things is counterproductive: in the end, getting into the habit of finding answers and solutions on one’s own is a way to learn, but because of this “google it, you dumb ass (gu-gu-re-ka-su)” mentality, most Japanese will refuse to ask questions even when talking to their colleagues from abroad. This creates a lot of misunderstandings when doing business globally, resulting in huge productivity loss.

I believe language is like an app operating with its own unique operating system. And the problem I see with most Japanese managers when they communicate with their counterparts from other countries is that they use English, but with a Japanese mindset: just as if you tried to use an iOS product on Android.

Communicating globally with the “gu-gu-re-ka-su” mindset never works, no matter how good your English is.

Eliminating the “gu-gu-re-ka-su” frame of mind is the first thing I try to do when training global communication skills to Japanese managers. This is extremely difficult because “gu-gu-re-ka-su” is deeply embedded into their DNA and because, usually, the only suggestion they had been given before joining my courses was “You need to ask questions!”

That’s bad advice. It’s like asking off-beat dance students to “simply feel the music:”, they can’t do it if they’re not told how to.

In my courses, I try to do just that: train people how to “feel the music”, how to switch mindset: first, by explaining that using a different “operating system” is essential when working with global partners. Then, by teaching how to do it.

It’s a trial and error process, but it does pay off in the end and, most importantly, it’s something everyone can really benefit from.

Because let’s face it, It may not be a “gu-gu-re-ka-su” matter, but interaction with other cultures can be tricky. And how to succeed at it is not that simple, not even with the help of Google.