How the Nail that Sticks Up Gets Hammered Down
Home 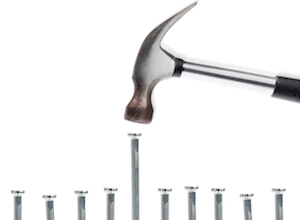 Some of you may have heard the old Japanese proverb “The nail which sticks up is hammered down.” Guides to doing business in Japan often illustrate this proverb using dress code (e.g., don’t wear flashy clothes to business meetings), but its meaning is much deeper than this.
A few years back, I helped organize a large conference in Tokyo, for which the goal was to have the young generation become more interested in politics. The speakers were top notch: CEO’s from established firms, a well-known TV news anchor, a journalist, a member of the National Diet, and a sociology professor from a prominent university. We invited young entrepreneurs and businesspeople on stage to discuss why young people aren’t voting and what we can do about it. Hundreds of college students came to watch this event. Then it happened…
An extremely well-known professor, with loads of publications under his belt, gave his opinion, and a young social entrepreneur did the unexpected: he challenged the professor by asking a question (in a positive manner), implying that he didn’t really agree with him.
While this typically happens at panel discussions around the world, this does not normally happen here in Japan. A young, unknown professional should never doubt or question an established professor’s point of view in public.
The professor started shouting, “Shut up! You have no idea what you’re talking about!” The young entrepreneur responded: “Let’s ask the audience then,” and turned to the young audience, to cast their votes. This drove the professor crazy and he continued yelling, “You shut the hell up! Who do you think I am?” not allowing the entrepreneur to further involve the audience. And then…
After a few seconds of silence, something strange happened. Some of the members of the audience (mainly college students) started clapping in favor of the professor. More and more people started to clap, and the young entrepreneur was forced to back down. After a few seconds of awkward silence, the facilitator changed the topic and the conference went on as if nothing had happened…
I found this incident very ironic.
But I also found that this incident provides insight into the Japanese mindset and it illustrates many unspoken rules. As I reflected on this incident, a few things came to mind:
Understanding what this proverb really means and how it happens may give you insight into the Japanese mindset in action. I would love to hear your thoughts not only on the Japanese mindset, but how might a sticking nail get hammered down in your culture.