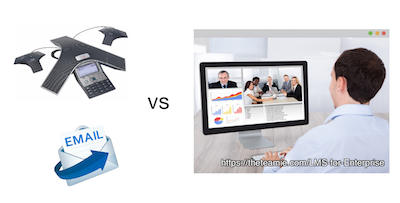 I am constantly surprised by the number of people preferring to interact via e-mails and phone calls over video conferencing, especially when communicating and collaborating with their global colleagues.

This are only some of the things people say to support their views against video conferencing. I know… I hear you: but my question for you is this:

Wouldn’t it be better to get work done faster, more proficiently and feeling like you are truly working in a team, rather than exchanging endless chains of emails with people you have never seen once in your life?

A research team at the Fraunhofer Institute in Germany carried an experiment examining the impact of video communication within a virtual work team, and compared results with the impact on the same of emails and phone calls*.

Researchers assigned a collaborative task to two groups and two subgroups. One group was asked to do a common budget allocation, with one subgroup using e-mail and phone to communicate, and the other video calling.

The other group was asked to plan an office move, with one subgroup only to use e-mails and phone calls and the other fully relying on video communication.

Key findings are crucial and should help you understand why I asked you that question, a couple of paragraphs above. Here’s what the German researchers have discovered. The subgroups communicating exclusively via video calls:

3. It made communication clearer and more effective

It is clear: visual contact enhances productivity, improves work relationships and supports good team work. Collaboration becomes smoother and so does decision making: great advantages, well worth having to stick a fancy cardigan over your pajamas for a video conference every now and then. Excellent, the study found out, are also the effects of video conferencing on concentration: well, it is much more difficult to doodle on a piece of paper or browse on Amazon while you are actually facing someone!

Researchers also concluded the use of e-mail and phone calls leads to a higher division of labor, re-enforces internal hierarchies and leaves little room for discussion, whereas video conferences resulted in a more collaborative approach to work.

Now, I’m assuming this study was conducted in Germany, and involved only two locations and German-speaking participants. Add “GLOBAL” into the equation and things are bound to change.

Let me explain to you why: when working in a global context, you are more than likely to have to add at least one more working location to the mix and, even more crucially, you will have to deal with a multi-lingual and multi-cultural team.

In an increasingly globalized world, this type of working relationship has become more and more common, yet we’ve been failing to fully understand the necessity of changing our ways to communicate in such context, thus decreasing productivity.

This is the problem I have been trying to address and solve for the past 6 years, during which I’ve been training both native and non-native English speakers working for global companies to communicate/collaborate more effectively. The first question I ask to my trainees is whether they commonly use video conferencing. For established firms, the answer is almost always “no.”

Yes, video conferencing can be a pain sometimes: there is a 14 hour time difference right now between Chicago and Tokyo there is a high possibility one of us would have to chat from home.

You might not be comfortable with people peaking inside your own personal space, and getting out of your pjs for a half an hour online meeting can be annoying at times: yet – and I learned this the hard way, after collaborating with over 150 freelancers from over 20 different countries – when it comes to productivity, trust and interaction, video conferencing remains a winner.

Global collaboration is a complex, multifaceted skill to master. Yet, turning on your webcam and engaging with your global colleagues face to face can boost productivity, enhance trust and, overall, improve your work activities: it seems a good place to start from.