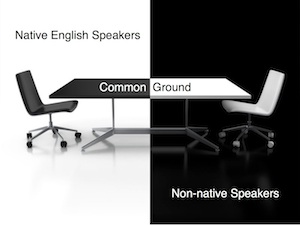 Ever felt anxious after communicating with your non-native English speaking global counterpart in fear that he/she didn’t fully understood you? If so, probably you’re right. She didn’t. But before you blame on her English proficiency, you might want to blame on yourself and consider re-learning how you communicate in English.
For the past three years, I have been training non-native business people (mainly Japanese) how to speak up and contribute in global business meetings. I always felt that it was the non-natives that need to learn how to speak-up to communicate effectively with native English speakers.
But recently, I found out that this only solves half of the problem.  Yes, non-natives need to learn how to speak up but equally important, native English speakers must learn how to speak down, finding a mutual ground for effective communication which, will lead to better decision making.
From September, I am conducting a 8 week global communication training course for a large pharmaceutical company in Japan. Normally I only have Japanese employees participate but this time, I wanted to make the training environment more real so I asked other Asian, American, European colleagues to participate.
For each session, I split that group into two groups, assign each group with a topic to discuss about, record the discussion (usually 15 minutes) on video, have everyone come back and watch each group’s video recording together.
I’m always amazed on how much we learn from seeing ourselves on video. Of course we try learn from the obvious (body language, bad habits, what was said etc) but what I find more important is unveiling what was NOT seen/said during the discussion.
For example, during the first session, a poker faced Japanese participant (Non-native A), silent throughout the discussion, slightly moved his hand (just a couple of inches), which looked clear to me that he came up with an idea, during a heated discussion between two native speakers. I stopped the video, asked what the idea was which shocked the native English speakers since it was the quality idea that, if said, could have led the group to a more better solution.
Non-native A:  I was waiting for the pause, the right moment, which never came.
Me:  We (Japanese) consider it rude to interrupt someone when talking. So even we’re confused, we’re very likely to listen in until you finish talking. Native English speakers need to pay close attention to our body language.
Native A:  But how can I pick those up? No way I could have sensed that one…
Non-native B:   I sensed that hand movement too.
Non-native C:  How about to make it a rule if someone senses the subtile cue, that person should voice that out? 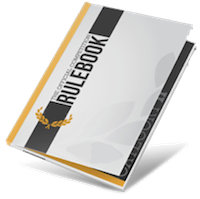 So born was “Rule #1″ in our global communication rulebook that we decided to create:

To this date (we have two sessions left), we have “6 Rules” which we agreed on. I’ve seen drastic improvement in both sides as we try to find the middle ground for better communication. By practicing “Rule #1″ you’ll show that you care which will make non-natives feel more relaxed to speak-up.
English is becoming the defacto language in this global economy but this doesn’t mean that native English speakers have the advantage. According to a Newsweek article on  June 21, 2010  titled “Glob-ish, English has evolved into the world’s language:”

…a French-speaking retired IBM executive had noticed that non-English speakers in the Far East communicated in English far more successfully with their Korean and Japanese clients than British or American executives.

I see this all the time. A couple of weeks ago, I sat in a global HR meeting for a US-based global company and quickly stopped the native English speaking boss at the beginning to clarify since I was 100% sure he lost over half of his subordinates within 5 minutes.
Yes, English might have won the global language war but has evolved into something different, a simple communication tool where non-natives can communicate successfully with each other. Emerging markets now account for more than half of world GDP (based on PPP, IMF report) and the game has changed. Native English speakers must re-learn how to communicate in English.